Journal Aims and Objectives
The cryosphere is the area of the earth that remains perennially frozen in the form of permafrost, glaciers and sea ice. As climates continue to warm and sea ice and permafrost retreats pole-ward, glaciers are receding and ice patches are shrinking. Some of these features contain unique archaeological finds that have remained frozen and well preserved for hundreds and even thousands of years. The earliest documented archaeological remains from frozen sites were discovered at the beginning of the 20th century. The best known glacial find is the Neolithic man of Hauslabjoch (Ötzi), found in the Tyrolean Alps in 1991. However similar glacial discoveries have been made in both the 20th and 21st centuries on a number of sites around the world. These include melting ice patches and glaciers in the Yukon, Canada, Alaska and Norway, Swiss, Austrian and Italian Alps, as well as important discoveries in the Andes, Urals and Greenland. As awareness of the potential these regions increases, important frozen objects continue to be recovered from newly discovered sites elsewhere. These frozen sites and finds as well as the methods and theories involved in their identification, excavation, conservation and display are the subject of this journal.

Frozen discoveries are often the focus of complex, multidisciplinary research but at the same time often retain strong connections with indigenous people and their life ways. High altitude and high latitude environments continue to be occupied by indigenous people and mountain divides often define international boundaries. Archaeological discoveries in these environments have led to international partnerships and collaboration with indigenous people and local residents. Glacial archaeology also provides a platform for interdisciplinary research into environmental science that is closely linked to the politics of science, nationalism, and climate change. The goal of this journal is to produce a publication that is inclusive, multi‐vocal and of a high scholarly standard.

The Journal of Glacial Archaeology encompasses all topics concerning archaeological discoveries from glacial, permafrost, polar and high‐altitude frozen contexts across the world and presents the latest discoveries and research from frozen sites .The main themes will include; archaeological analyses of recovered frozen artefacts, interpretations of frozen finds in relation to past and present climates, problems and solutions related to managing, monitoring and rescuing frozen deposits as well as social, political and ethical issues related to these discoveries. With sites and discoveries from Europe, North and South America, Asia and Antarctica included, JGA will present an exciting forum for this complex branch of archaeology. The close relationship between many of these frozen discoveries and the effects of global warming makes this new project current and relevant.

The Journal will include original multidisciplinary research papers, short reports and reviews including archaeology, anthropology, ethnography, glaciology, geography, palaeobotany, indigenous knowledge, conservation science and climatology. Potential contributors may submit online; please go to 'For Authors' at the top of this page to view the guidelines for submission. 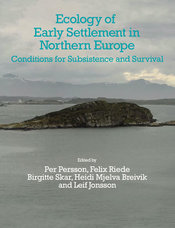 Ecology of Early Settlement in Northern Europe: Conditions for Subsistence and Survival
Edited by Per Persson et al